Impact Wrestling is all set to present its second monthly special show of 2022 in the form of No Surrender on February 19. It will be the 14th event under the No Surrender chronology and will air from the Alario Center, New Orleans, LA.

Moose vs W. Morrisey IMPACT World title match is announced for the show. Knockout Championship Match between Mickie James and Tasha Steelz will also take place at the same event.

Keep on reading to check all the details on the Impact No Surrender 2022 event.

The tickets for the Impact No Surrender event at the Alario Center can be booked via the link given below for $25 to $150 plus charges.

Buy Tickets for Impact No Surrender

Impact Monthly shows like No Surrender will be available to watch on Impact Plus, and they can also be watched through Youtube Ultimate Insider. The event will also stream worldwide via Fite TV website and app for $9.99. Check the below link to buy the event. 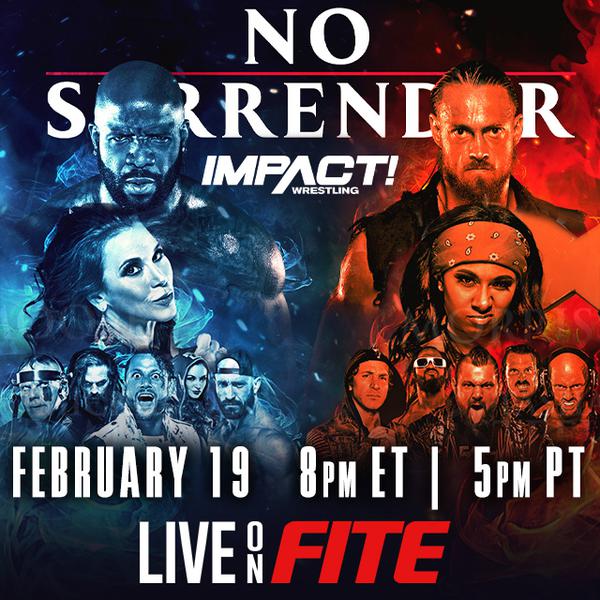 February 17, 2022: Deonna Purrazzo announced an open challenge for either of her titles – ROH or AAA Women’s title – at No Surrender.

February 10, 2022: Scott D’Amore removed Josh Alexander from Team Impact after he shoved D’Amore for not getting the World Title match and threatened to leave Impact. Steve Maclin replaced him in the match.

February 3, 2022: Jonah defeated Decay’s Steve Crazy in a singles match. He later had a staredown with Decay’s Black Taurus.

January 27, 2021: Bullet Club’s Jay White came out to assist G.O.D. in the attack on Jake Something and Mike Bailey. Violent By Design came out to save Something and Bailey. IMPACT announced the match between White and VOD’s Eric Young for this event.

January 27, 2021: After multiple interruptions by Honor No More, Scott D’Amore announced a tag team match for them at No Surrender against Team Impact. The stipulation for the match was that if Honor No More manage to win the match, they can stay in IMPACT Wrestling. Eddie Edwards, Josh Alexander, Chris Sabin, Rhino, and Rich Swann were announced as the members of Team Impact.

January 20, 2021: Morrisey vs Moose IMPACT World title match is confirmed for the show.

December 22, 2021: IMPACT announced its upcoming schedule calendar and No Surrender is scheduled for February 19, 2022.