UFC Fight Night: Kattar vs Emmett event will take place on June 18, 2022. UFC Fight Night reaches Moody Center in Austin, TX, with this event. The show is also known as UFC Austin or UFC on ESPN 37.

The event will see Calvin Kattar vs Josh Emmett featherweight bout in the main event. As of May 28, 2022, Kattar is at #4 in the featherweight rankings while Emmett is at #7. A win here will establish either man as the new contender for the title.

Donald Cerrone vs Joe Lauzon bout, which was scrapped from earlier from UFC 274, is rescheduled for this show as the co-main event. Kevin Holland vs Tim Means welterweight bout is also scheduled for the main card.

Check below for the complete details on UFC Fight Night Austin: Kattar vs Emmett or UFC on ESPN 37 event.

The tickets for the UFC Fight Night Austin are available at the below link. The price for tickets starts from $96.

May 10, 2022: ESPN reported that the scrapped bout between Donald Cerrone vs Joe Lauzon from UFC 274 has been rebooked for UFC Austin.

May 03, 2022: UFC officially announced via press release that Joaquin Buckley vs Albert Duraev middleweight bout will take place at this event.

April 30, 2022: MMA Fighting confirmed the report that Calvin Kattar and Josh Emmett will headline the UFC event on June 18.

April 29, 2022: Kevin Holland announce on his Twitter page that he will fight against Tim Means at this event. more details

April 4, 2022: Setanta Sports reported a middleweight fight between Kyle Daukaus and Roman Dolidze has been rebooked for this event. This bout was previously booked for UFC Fight Night: Holloway vs. Rodríguez event, but it was scratched from the event due to COVID-19 protocol related to Dolidze’s camp. 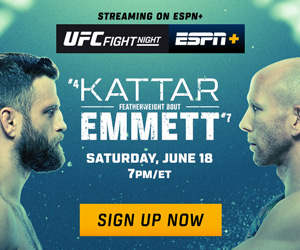